THE BIG MAN OF HOSAENA

Estifanos Worku Abeto
Name: Estifanos Worku Abeto
Age when interviewed: 72
Born: Hosaena, Ethiopia
Interviewed in: Yeoville, Johannesburg, South Africa
Interviewed by: Tanya Pampalone
Photographed by: Madelene Cronje
Estifanos Worku Abeto grew up in the town of Hosaena, in the southern region of Ethiopia. The son of a farmer and his second wife, he got a job out of high school working for the local government in agricultural research. Later he studied botany at Haramaya University, returning to the civil service where he would stay for the next 35 years. He escaped the country in 2007 because of political problems, opening a shop with other Ethiopians in Tsakane, 50 kilometres southeast of Johannesburg, in February of 2008. Three months later, the xenophobic attacks erupted across the nation.

The attacks happened on 19 May 2008. The night before, the community people were warning us. They came to the shop and were dancing and singing, saying, ‘You foreigners, you must go back to your country! What are you doing here? This is our money! This isn’t your money!’ They were terrorising us. ‘You kwerekwere, we’ll show you!’

We didn’t sleep that night. Though we were very scared, we couldn’t leave. We were thinking these people would come and kill us. But the South African lady came to reassure us. She said, ‘Don’t worry.’

The next day, very early in the morning, they came in groups, singing. They went to all of the foreigners in the area. The three of us were hiding inside the shop, and they came en masse and broke down the door. The police were there, too, and they tried to protect us but there were too many people and they couldn’t stop them. The community people were warning the police. They were warning them, saying: ‘Take care. This is South Africa. We are South Africans.’

The landlady was crying. ‘I’m South African. What are you doing?’ They screamed, ‘Where are the foreigners?’ They were grabbing us, beating us, kicking us. We acted like dead people. The lady screamed, ‘Are you killing me? Are you killing them?’

Then they left, taking the blankets, the comforters, the bedsheets, the carpets. They even took our cooking oil. Then they went to the money. We had R80 000 cash. They took everything we had. Then they broke the owner’s house. After they left, the police took us to the police station in Tsakane and we opened a case and listed everything that was looted. They gave us a case number, registering everything we said but they told us they couldn’t do anything. They said, ‘This is the community. What shall we do?’ 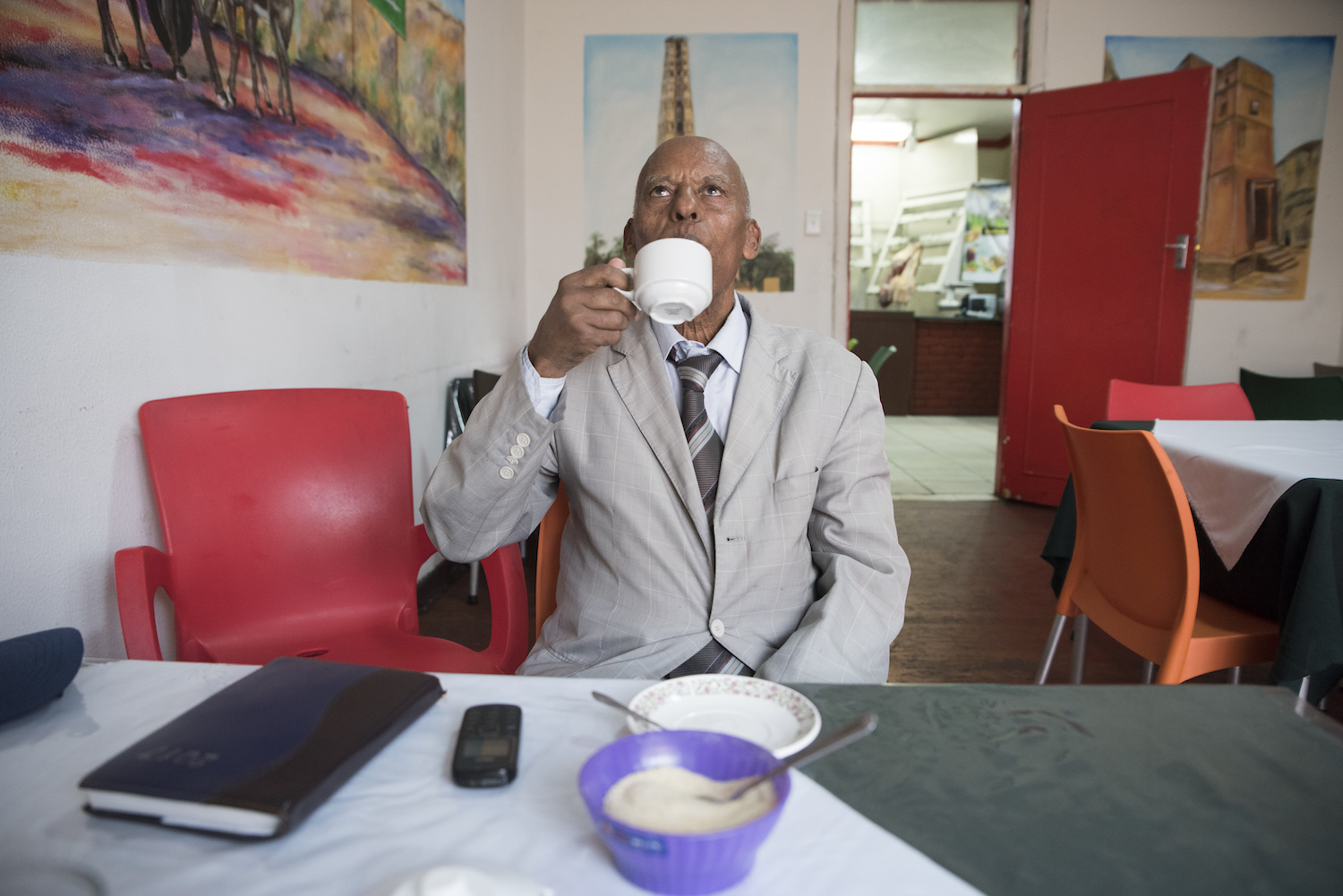 The police took us to go to the UNHCR camp, which was set up in Springs. There were more than 300 or 400 people staying there by then. We ended up staying there for five or six months, living in tents, and they gave us food, clothes and blankets. It was very comfortable. I thank South Africa for this.

In the camp, I helped to coordinate the people. The Ethiopians elected me and, with the guys from Malawi and the other Zimbabweans, we were arranging the queues and the donations that were coming in.

Many different politicians came to the camp. They said, ‘Don’t worry. Be patient.’ The white politicians [from the opposition Democratic Alliance] said, ‘Maybe you will go to another country.’ The ANC politicians were saying, ‘You must integrate.’ They told us those people who attacked us were in prison. But those people were not in prison; it was not true. They were saying that just to comfort us.

The people in the camps were refusing to integrate back into those communities. How could we integrate with the South Africans? We didn’t have anything. Everything we had was stolen. We were afraid; we were saying, ‘How can we leave here? They are the enemy. If they see us, they will kill us.’

But after the politicians came, the camp was closed and the few of us who were left were taken to another camp. I remember very well one man, a Rwandan from the United Nations, who spoke French. He said he could help me because I was a gentleman. But he was only helping the Congolese. He was a corrupt person. He was taking money. But I had none. He said, ‘Don’t worry, I’ll help you.’ But he didn’t help me. Only God helped me.

After the camps closed, Worku Abeto headed back to Yeoville, where he still lives in a small room with three other men. Since the attacks, he has been actively involved with the diaspora community, including the African Diaspora Forum. Worku Abeto often represents Ethiopians living in Johannesburg in matters with the government. 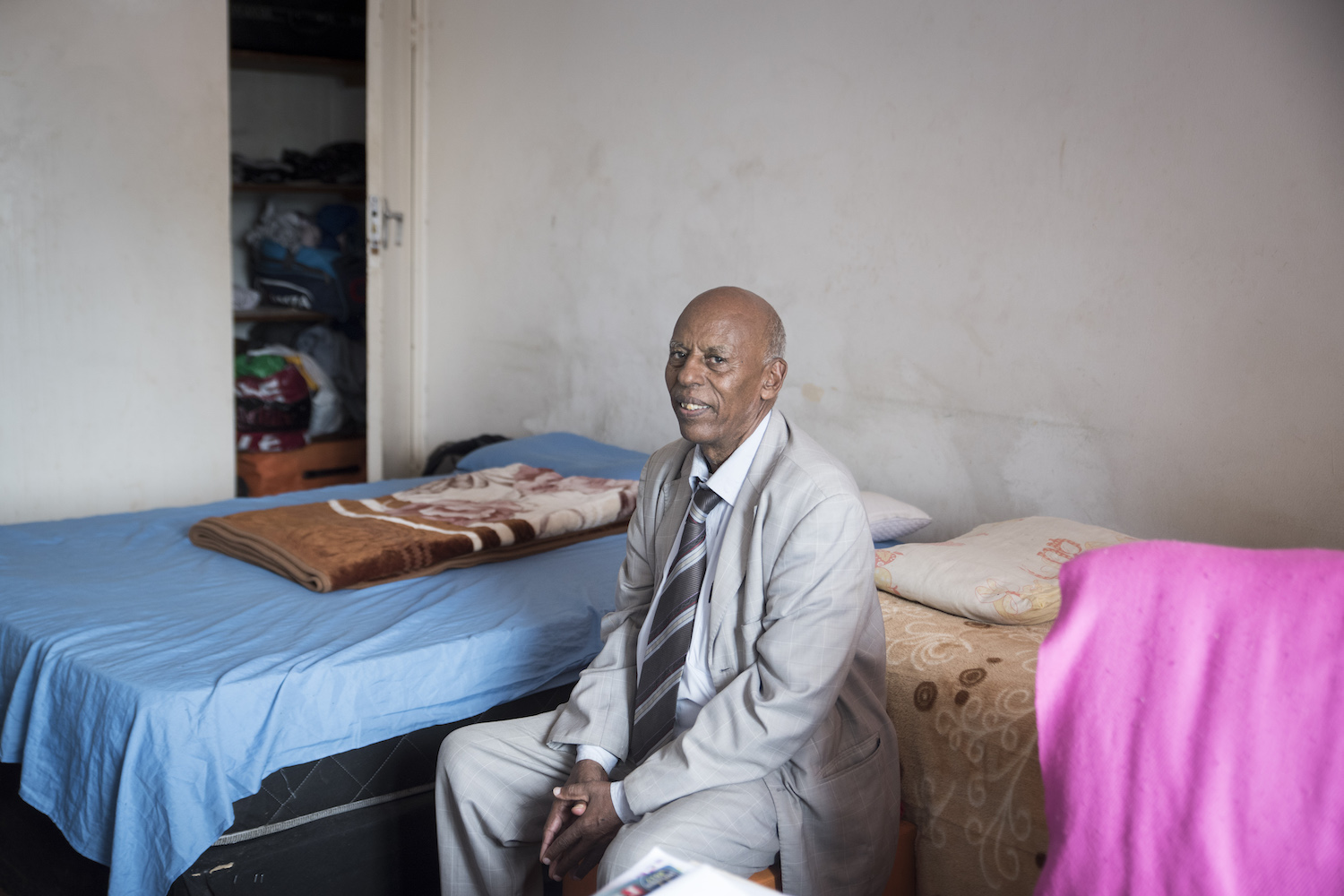 They didn't need any foreigners in Soweto

There were xenophobic attacks in Soweto again in January 2015, and foreign shops were looted for one month. The Soweto community then said they didn’t want any foreigners in Soweto. There was one lady, Mama Rosa, who wrote a report for the small business minister. I went to Pretoria to represent the Ethiopians, but there were also representatives from Somalia, Pakistan and Bangladesh.

We had a three-day meeting in the minister’s office so we could hear the report and give our feedback. They had the report taped to the wall, and after two days, they asked us, ‘What do you think about this? What are your ideas? What are your objections?’

I raised my hand – there were representatives from many offices, from Home Affairs, from Social Development, more than 20 staff and one white lady taking minutes – and I said: ‘How can you take this rubbish? Let me tell you something. I’m older than all of you. Maybe you have more knowledge, but you do not have more experience than me. You South Africans were foreigners in many countries. Mandela was in Ethiopia. He was a foreigner. Mandela went to the Ethiopian government and they gave him military training.’

We were helping them. But South Africans don’t know about this history. They didn’t learn about African history in school, but they were listening eagerly to what I was saying. I told them, ‘Please, how can you say you don’t need foreigners? Foreigners are everywhere. This is a shame to say that no one can enter Soweto.’