THIS COUNTRY IS MY HOME
Azam Khan
Name: Azam Khan
Age when interviewed: 36
Born: Punjab, Pakistan
Interviewed in: Roslyn, Pretoria, South Africa
Interviewed by: Nedson Pophiwa
Photographed by: Madelene Cronje
Azam Khan is one the many hawkers trading in Rosslyn, an industrial area in Pretoria North, where he repairs cellphones and sells cellphone accessories. He has lived in South Africa since 1999. Whereas many of his fellow Pakistanis tend to distance themselves from the local communities, focused on living to work so they can return home with money saved, Khan has learned to speak Setswana, one of the 11 official languages of South Africa, and married a Tswana woman. He says he has lived for too long in South Africa to still call himself a foreigner.

I remember the day I arrived on the flight from Pakistan with my friend. He took me to my new home in the suburb of Laudium in Pretoria West. I felt at home there because there were other guys from my country who spoke my language and I was quickly introduced to them. I also saw that there were Indian people and some from Bangladesh which made it feel very warm. The first few days I wasn’t really bothered to mix with them or to hang out with them because I was just thinking about what my next plan would be in this country. 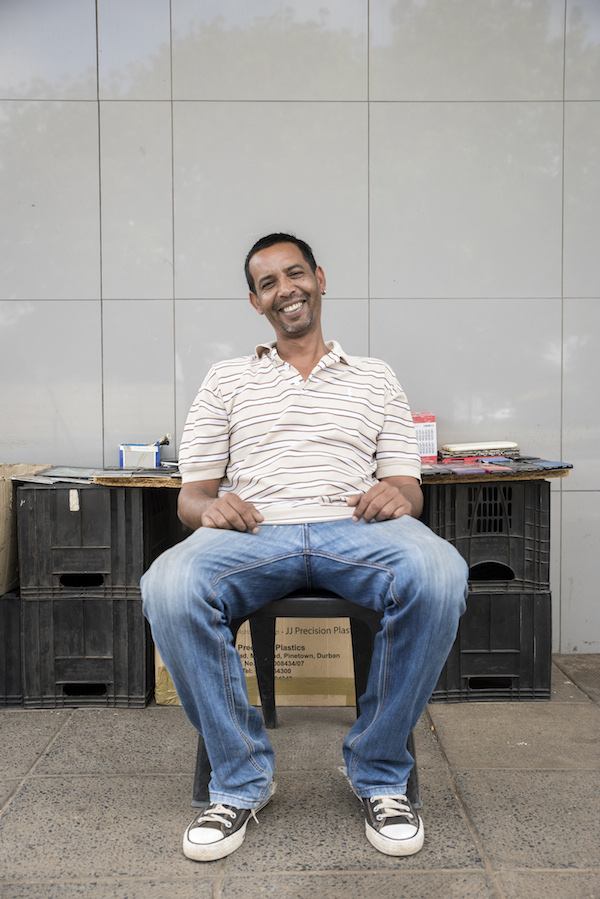 I had about a thousand dollars with me, which I was supposed to use to start something – maybe a small shop. My mother had helped me with that money and I was looking forward to paying her back. But guess what? My hosts were not very good advisers. They actually helped me to blow up all that money. Within the space of two weeks I blew all that money away in pleasure, having a good time enjoying Pretoria’s nightlife. I had never been to any of these clubs with music playing loud, and the girls were just coming to us very easy, you know. I liked it, and partying needs a lot of money, so I just had my fun.

Then I was broke, and I called my mother telling her that I wanted to come back home. I said, ‘Mom, I really have to come back. This place is not good for me, I miss home and I think it’s best to come back.’ She didn’t listen to me or feel sorry for me. She just said – I remember her last words – ‘Grow up and stick it out there in South Africa; we don’t want you to come back just yet.’ So, there I was with such a reply from my mother and I was left with nothing else to do but find a job.

WE DON’T WANT A MAKULA HERE

I met my wife on one of my usual door-to-door sales trips in the township – in Ga-Rankuwa in 2001. I knocked on this particular door and an attractive young lady came to the door and opened it. You know, the moment I saw her, I could feel in my heart that I loved her. I didn’t hesitate to ask her name, and told her I was going to come and see her again. You know, those days there were no cellphones, but anyway we used to make appointments and then would meet in the streets near her house. She was living with her grandfather, and he did not know about our relationship. I sometimes would come to their house like I was selling watches as a way to see her.

She had just completed her matric and didn’t know what she was going to do with her life. She kind of reminded me of those days when I was still home, trying to think of what to do next in my life. But you know what? One day we realised she was pregnant. I said I will marry this woman and so I approached her family. I wasn’t sure how to go about the process of lobola but some guys in the township told me that I was expected to pay some money for cows and then buy some gifts for the family. Obviously, this was all new to me but I wanted my girlfriend to be my wife. There was a terrible incident one day when I was visiting her. An uncle of hers saw us and he was not happy at all. This malume was very angry because he was so against the relationship.

Can you see this scar on my hand? It was this uncle who stabbed me. He ended up stabbing me with a knife on my wrist, shouting ‘Hey, we don’t want a makula here; go away!’ I had to rush outside and avoid being stabbed some more with that pocket knife.

I remember very well how I was bleeding on the one hand, driving with the other one back to my place in Laudium. I was afraid and also very angry because now I really wanted to marry this woman but her family was being tough on me. I don’t think I cared what this man was thinking about me or if he was going to accept me, because what mattered to me was my woman and the family we wanted to start. I just said I will keep my distance from her family if they don’t want to see me.

But that was the only incident when I was shown negative feelings by the family members. Maybe they thought I was trying to use their daughter by marrying her, but I was just in love. Slowly, slowly they accepted me as a son-in-law. So later, in 2002, I approached her family to pay lobola. We talked about it and I negotiated for R8 000, paid all of it and we were now officially married.

Now my wife and I have three children. All of them are girls. The oldest one is almost 15, followed by a nine-year-old, and the youngest is seven. With my assistance, financially, my wife enrolled in a nursing school, which became her job even up to now.

We have now been married for so many years. That malume, I still see him every time I see the family and now we have become very good friends. We joke about that incident because it was a long time ago. But I was never really a victim of xenophobic violence like those other cases you read about in the news. I just experience things on a daily basis; attitudes like people calling me makula. It doesn’t bother me; I just hustle.